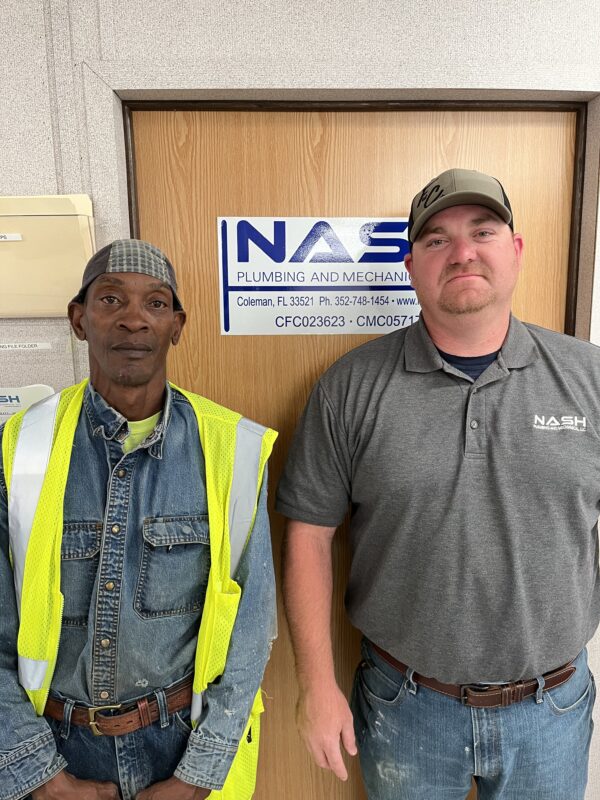 Below is a testimony of true events that took place in March on the Fort Gordon job site in Augusta, Georgia. Thanks to Nash Plumbing and Mechanical employee owners’, Anthony Bradley and Allen Williamson an individual’s life was saved! We’d like to acknowledge these two individuals’ incredible courage, trust and teamwork during the potentially life threatening moments that played out on this day.

“On the morning of 3/17/22 I, Allen Williamson, was in conversation with Rodney Yeager (Gilbane Safety). While standing in front of the office a call for assistance came over the radio. Someone advised Rodney of there being a man down on the roof of MCA-1 and they then advised that he was not moving. I advised Rodney that I would get the AED and make my way to the location. I donned my PPE and then got AED from safety building. Upon entering the roof area, I observed 2 gentlemen (David Jones & Bill Salyers) conducting CPR on an approximately 60-year-old male who was blue from the neck area up. The patient was unresponsive and had agonal respirations. I placed AED on patient and AED began to analyze. Upon analyzing the AED stated, “SHOCK ADVISED”. I cleared all people from patient and delivered shock and then directed David Jones (ACC) to continue CPR. While David was doing compressions Bill Salyers (ACC) was administering rescue breathes. CPR was then continued until AED began to analyze again. The AED then advised “NO SHOCK ADVISED” then David and myself checked patient for pulse. With no pulse felt CPR was continued for another cycle (Allen Williamson). The AED analyzed again and once again stated “NO SHOCK ADVISED”. Upon checking for a pulse there was a noted radial pulse. Patient had also began breathing at a near normal rate as well. Monitored patient while waiting on basket to be set on roof of building. Patient began opening and moving his eyes. After what felt like several minutes the patient began moving his head and speaking. When the basket was set down on the roof the patient was immediately placed on a piece of plywood and then into the basket. David, Bill and another gentleman got in the basket with the patient and monitored patient while descending to the ground. Once on the ground patient care was turned over to EMS. As a near 20 year veteran of public safety (FIRE/EMS) it is my opinion that without the efforts of David and Bill this situation would not have the possibility of a positive outcome.” Allen Williamson, NASH Plumbing and Mechanical, LLC. Safety Manager

What an amazing example of HB Global’s Core Values: Trust and Team. For all involved, you should be so proud of your quick response, knowledge, and resilience!